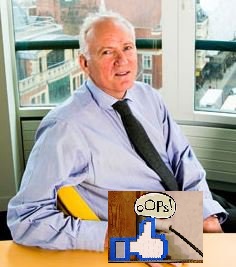 Lots has been said about bankers and broker-dealers blabbering via social media. The topic has helped to create plenty of compliance department angst across the brokerdealer universe. Now, thanks to the latest DealBreaker snapshot, one that also provides free advertising for social media app SnapChat, the folks here at BrokerDealer.com remind our industry audience: Think twice before you hit the ‘send’ or ‘publish’ button.

The chairman of Royal Bank of Scotland’s investment bank is leaving just weeks after messages he sent to his daughter were revealed, showing he was “bored” at work. Rory Cullinan, the RBS capo used photo-sharing app Snapchat to send images featuring captions that read: “Not a fan of board meetings xx”, “Boring meeting xx” and “Another friggin meeting”. The pictures then ended up being posted on Instagram around Father’s Day last year by the investment banker’s daughter, but only revealed in a national newspaper early this month. Mr Cullinan’s daughter had uploaded the photos with the message: “Happy Father’s Day to the indisputable king of Snapchat.” Mr Cullinan drew heavy criticism for not taking his role seriously.

Facing another multi-billion pound loss, Royal Bank of Scotland announced that its investment bank will cut 60 percent of assets and exit most international markets.

“Let me be quite clear, this marks the end of the standalone global investment bank model for RBS,” Chief Executive Ross McEwan said, according to Reuters.

RBS’s investment bank will withdraw from 25 of the 38 countries in which it operates to focus more on U.K. operations, while offering scaled down services in other markets kept largely to service its U.K. customers.

“We want to continue to run a small markets operation in the U.S. and Asia, but those operations will be considerably smaller,” McEwan told the Financial Times. “A lot of people trade in U.S. dollar and yen, this is what our corporate clients need and we are going to be there for them.”

The company added that RBS will remain in the U.S. to serve “a select group of North American clients with strong links into the U.K.”

Job losses in the investment bank, which is estimated to have 16,000 to 18,000 employees, are expected to be significant.

Rory Cullinan, who has headed the RBS “bad bank” which has divested or closed unwanted or unprofitable operations, will now become executive chairman of the corporate and investment bank, replacing Donald Workman, who will become executive chairman of RBS’s private banking franchise, called Coutts. Sir Howard Davies, who was the first chairman of British financial regulator Financial Services Authority (FSA) from its formation in 1997 until 2003, was confirmed as chairman of the bank, replacing Sir Philip Hammond who is leaving for a top role at GlaxoSmithKline.

The announcement of the drastic measures came as RBS announced a loss for 2014 of 3.5 billion pounds ($5.4 billion). The loss was affected by a 4 billion pound write down on Citizens Financial Group in the U.S., which will likely be sold or might go public. The annual results were a sharp improvement from last year’s loss of 9 billion pounds, but the bank, which received a 45 billion pound bailout by taxpayers during the financial crisis, has not turned a profit since the bailout. Instead, it has posted 49.5 billion pounds in losses since that time.

RBS also announced that it is selling $36.5 billion of U.S. and Canadian loan commitments to Japan’s Mizuho Financial Group for around $3 billion, generating a $200 million loss for RBS.