The chinos are gone. So is the sprawling Silicon Valley hub. 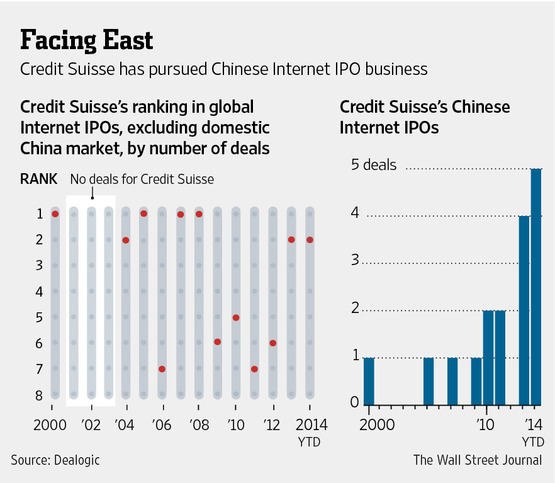 But more than a decade after its fall from the peak of the dot-com-banking business, Credit Suisse Group AG CSGN.VX -0.33% is at the helm of some of the sector’s biggest deals.

The bank is one of the lead managers of the expected $20 billion-plus initial public offering for Alibaba Group Holding Ltd., the Chinese online shopping and e-commerce giant.

Credit Suisse’s Internet-banking business stumbled after the dot-com bubble burst and Mr. Quattrone was convicted—a decision later overturned on appeal and the charges dropped by the government—of attempting to obstruct a regulatory probe into alleged abuses in share allocations.

For its new foray, the bank plucked Bangladesh-born stock analyst Imran Khan to help lead its charge as head of Internet investment banking. Mr. Khan, a number cruncher with a network of contacts throughout Asia, particularly in China, was hired in 2011 from J.P. Morgan Chase JPM +0.84% & Co., where he had covered Internet companies.

As a former stock analyst, Mr. Khan, 36 years old, wasn’t an obvious pick for a bank hoping to quickly ramp up. But Credit Suisse wanted someone steeped in data, capable of identifying big trends and small companies that could be IPO candidates.