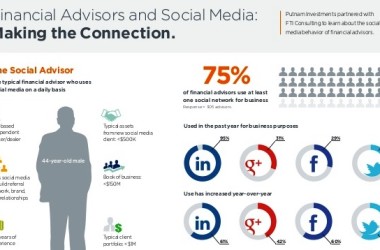 (InvestmentNews.com)-Google “New York wealth adviser” and David Edwards’ Heron Financial Group is one of the first firms to pop up, due in part to his early and dedicated approach to social media.

The advisory firm founder posts market commentaries, photos from conferences and other information on Facebook, LinkedIn, Twitter and the firm’s YouTube channel. Many of the posts are linked between the platforms and lead visitors back to the firm’s website.

“The breadth of information from us and about us on social media enables someone to go from curious to prospect to client in a short time frame,” said Mr. Edwards, who founded Heron Financial Group in 1993.

The Social Media Advisor to Advisors and BrokerDealers- The JLC Group

Advisers shouldn’t be afraid to jump on social media and see what works, he said. Through trial and error, advisers can evaluate which of the sites their clients and prospects are on and what topics garner the most interest, or “clicks.” Mr. Edwards directly asks for feedback about what followers do or do not like.

He found publishing on WordPress to be fruitless, and believes not enough of his clients or prospects use Google Plus to invest the time in figuring that one out.

On the sites Mr. Edwards does frequent, he has found that posts with photos of people, such as smiling clients at a polo match or sailing on Mr. Edwards’ sailboat, generate a lot of attention.

Though social media is not expensive, advisers have to recognize it requires a time commitment. Mr. Edwards said he spends about an hour a day writing for and interacting through social media. It was an even bigger time-commitment just starting out.

Heron Financial Group‘s social media focus has helped position Mr. Edwards as an expert on particular issues, and has generated media attention for the firm, which saw its assets under management grow about 20% last year, to $205 million. 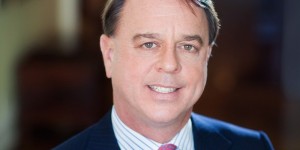 The direct results of a social media strategy can’t be evaluated in a traditional return-on-investment sort of way, but consider this: Even if a post doesn’t directly cause a client to walk through an adviser’s door, few clients will bother to come to an adviser before first checking them out online. Who knows which commentary or smiling client photo will get them to pick up the phone.

• Do not put boring headlines on posts; people respond to fear and photos. A recent market commentary from Heron was titled: A Client Asks, “What’s the Worst Case Scenario?”

• Hire a consultant to help develop a social media strategy and evaluate how well the platforms are working for your firm.

• Never write something on social media that you wouldn’t want to see in the Wall Street Journal.

• Make sure any communication through a social media network is archived, as required by the Securities and Exchange Commission and the Financial Industry Regulatory Authority Inc.

• Advisers must stay within the compliance guidelines of their firm and regulators, including rules against touting a specific product or investment, or posting performance data. 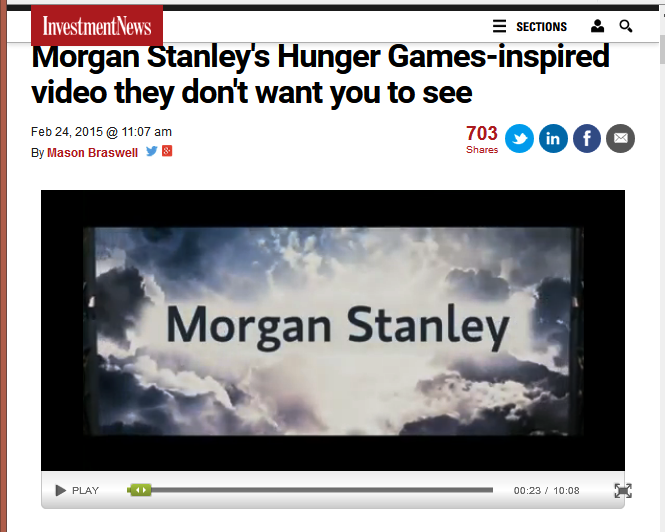 Morgan Stanley, a leading investment firm specializing in wealth management, investment banking and sales and trading services, just wanted to have little fun at their 2014 branch manager’s meeting. They created a parody to the “Hunger Games: Catching Fire” movie but choose not to show it, for very good reason. Unfortunately for them InvestmentNews obtained a copy of the video and has shared, the news has been catching fire (pun intended) and people aren’t happy.

One senior executive from corporate branding firm, The JLC Group, which counts a number of financial service firms as clients stated, “On the one hand, one could defend the video production as an effort to appeal to a certain employee demographic. On the other hand, whoever enabled the video to be released should have both hands tied behind their backs. Or, MS execs should simply take a cue from the video’s title and fire the manager who was behind this project.”

There’s a grain of truth in every joke, and while a video Morgan Stanley produced last year as entertainment for a branch managers’ meeting was an obvious parody of the “Hunger Game” film series, it provides a unique, behind-the-scenes look at the country’s largest wealth management firm.

The 10-minute video, titled “Margin Games: Manager on Fire,” was ultimately shelved and never shown at the branch managers’ meeting in February 2014. But the video, a copy of which was obtained byInvestmentNews, seems to reflect a cutthroat culture among wirehouse managers and a lack of congeniality between leaders in the field and executives in the home office.

(The video is being presented here in its entirety because it is a parody and individual scenes may not make sense without the full context and plot.)

Starring a number of the firm’s top brass, including Shelley O’Connor, who oversees the firm’s approximately 16,000 advisers, the film has executives in a war room at headquarters, pitting branch managers against each other in a death match resembling the one portrayed in the “Hunger Games” series.

There are moments where managers joke about the coldness of senior leadership: “They’ll have somebody at your desk on Monday,” one manager says to a competitor.

Other scenes feature jokes that hinge on racial stereotypes, including having an Asian woman appear as the expert in martial arts who pulls knitting needles from her hair and throws them at a dart board.

The company won’t talk about the video or say why it decided not to show it. A spokeswoman for the firm would say only that the video was never released.

But according to sources familiar with the video who did not want to be identified, Greg Fleming, the president of Morgan Stanley Wealth Management, was involved in the decision. Sources cited different possible reasons for pulling the video, including concerns of human resources personnel about some of the jokes or scenes of violence in the workplace.

Some current and former Morgan Stanley executives who asked not to be identified said the fact that a video was even made that joked about people who were losing their jobs shows the detachment of executives from other employees. In fact, two months after the managers’ meeting,the firm began a reorganization. The firm cut the number of regions to eight from 12 and reduced the divisions from three to two. One of the divisional directors who was featured in the video, for example, left the firm after his position was eliminated. Four regional managers were moved to different roles.

For the complete article and to view the original video, click here.