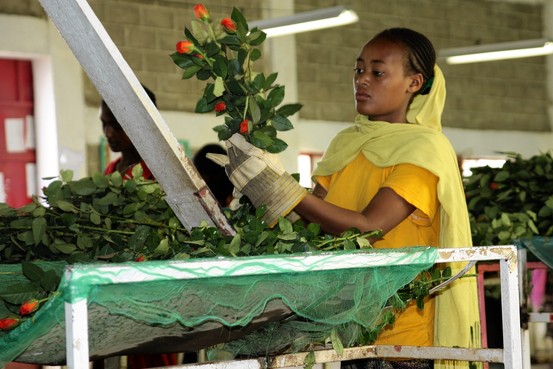 KKR is investing about $200 million in Ethiopian flower company Afriflora; above, an Afriflora worker. Afriflora

Afriflora is an Ethiopian company that grows about 730 million of the flowers a year for export to Europe, making it a significant player in the east African country’s blossoming cut flower export industry. KKR is investing about $200 million from its $6.2 billion European fund to buy a stake in the company, according to a person familiar with the transaction.

The deal opens a new chapter for KKR, the New York-based firm best-known for its hostile $25 billion leveraged takeover of RJR Nabisco RAI +1.47% in 1988, the subject of the book “Barbarians at the Gate.”It also comes as private-equity firms, seeking opportunities outside the crowded markets of North America and Europe, show tentative interest in Africa. KKR rival, Washington-based Carlyle Group CG -0.34% LP, raised a $698 million African fund earlier this year and has invested in a food distributor and a logistics company, for instance.

Private-equity investment in sub-Saharan Africa increased 43% to $1.6 billion in 2013 from the previous year, according to the Emerging Markets Private Equity Association. Investors are attracted by fast economic growth in some countries on the continent. The Ethiopian economy grew by an average 10.6% a year between 2004 and 2012, according to the World Bank.

“We see Africa as a long-term attractive investment destination,” said Kayode Akinola, head of KKR’s African operations. “The potential is astounding. But the work to get there is going to be considerable.”

For the full story from the Wall Street Journal, click here