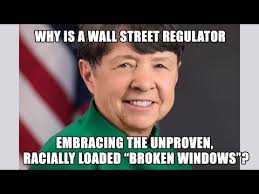 Unfortunately, the “broken windows” strategy championed by Ms. White is fundamentally flawed. By going after minor offenses, it artificially inflates the SEC’s enforcement actions and gives the appearance of being tough on bad actors. In reality, it is a mirage.

For example, in October, the SEC commenced 34 cease-and-desist actions against public companies and their insiders, alleging violations under Sections 13 and 16 of the Securities Exchange Act of 1934, for failing to timely report information about holdings and transactions in company stock. While this action created a nice headline for the SEC and inflated its yearly statistics, it likely did little to prevent more serious violations of the federal securities laws.

Filing more cases involving smaller infractions simply does not lead to greater compliance by companies like banks and brokerage firms with thousands of employees. The flawed assumption underlying the “broken windows” approach is that the message of deterrence will be heard before violations escalate. But it is rare in white-collar crimes that someone moves gradually from skipping a few filings, the classic small case, to perpetrating significant accounting fraud, defrauding thousands of investors or an insider-trading scheme. Typically, Wall Street brokerage firms engage in large-scale violations without working their way up the ladder of criminality. So the deterrent message is less likely to be heard.

The strategy also provides cover for the SEC to avoid going after the big banks and brokerage firms that are responsible for most of the serious securities fraud-related carnage. The level of financial chicanery engaged in by banks and brokerage firms leading up to the 2008 market crash was extraordinary. Virtually every major bank and financial company on Wall Street engaged in criminal scandals that impoverished millions and collectively destroyed hundreds of billions, in fact, trillions of dollars of the world’s wealth —and nobody went to jail. The SEC’s passive approach to punishing banks and brokerage firms that engaged in this activity led to blistering criticism that the SEC was simply too soft on major market players. An unwillingness to go after the large corporations that engage in most of the serious misconduct cannot be hidden under an avalanche of small actions against fringe wrongdoers.

Even current SEC Commissioner Michael S. Piwowar took aim at the strategy in a speech Oct. 14 when he stated, “A “broken windows’ approach to enforcement may not achieve the desired result.” He argued the idea was flawed because the ultimate goal of regulation is to achieve resilient markets, not regulatory compliance. “If you create an environment in which regulatory compliance is the most important objective for market participants, then we will have lost sight of the underlying purpose for having regulation in the first place,” Mr. Piwowar said.

For the full article from P&I, please click here